Dark Deathmatch is a special mode in Dolguth placing the fighters in a completely dark arena with the mech/pilot as the only light source. In terms of gameplay this puts the challenge at a higher level as the player has a very limited view of the stage (and its traps).

Here Durgai can clearly spots Sadness Deployer position, but cannot know if a trap or a hole is between them. 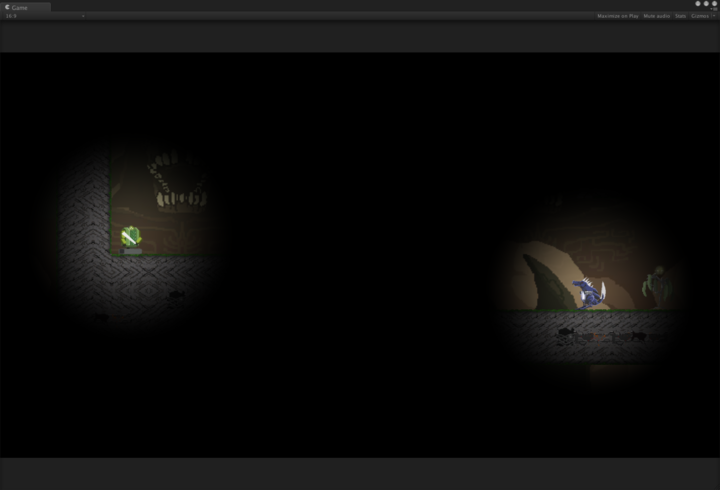 How to accomplish this ?

The first approach we followed was a very orthodox one: we iteratively change the material shader of each sprite (included tiles and props) from Sprite/Default to Sprite/Diffuse and we added a point light to each Mech/pilot object (ensuring the light is correctly aligned in a 2d world).

This worked very well, and with a very appealing result. Unfortunately we got two problems:

The second problem was not a big one, we decided to simply remove props from night arenas, but performance, in a game like dolguth where speed is the main factor, cannot be sacrificed.

This techique allows the developer to get access to the whole resulting framebuffer (you basically get the bitmap of each frame of the game) and to modify it with a shader. Effects like global fog, grayscale decolouring or sepia tone, can be easily accomplished with a so called "screen shader" (a shader accessing the whole screen).

In our case we want our shader to draw each pixel as black (dark areas) except for the virtual circle (with configurable radius) around each mech/pilot.

The first step was instructing our main camera to apply an effect on the screen:

The OnRenderImage() function is called for each frame of the game, the source argument is the content of the current framebuffer, while destination is where you are expected to draw the result of your work (read: this is what will be effectively rendered).

Graphics.Blit() allows you to draw a source framebuffer to a destination one applying a material (that has a shader obviously) to it.

Next step is defining our Night shader

The goal now is disabling black for the virtual circle around each mech. For doing it, we need to pass the position of each mech (read: light) to the shader. We use a Vector4 to represent a light: x and y are the light position, z is the radius of the virtual circle (light distance) and w is a flag: 0 light is turned off, 1 is on.


// global reference, this is where all game data is stored
Global gb;

Code comments should help in understanding it, but basically we are only passing our vector lights to the shader.

When writing shaders you always need to remember that 'if' are expensive, and when you want to pass lot of data, uploading textures (that will be used as generic buffers in the shader) is the only viable approach. But 'uploading' is expensive too, so if you have data constantly changing re-uploading the texture at every frame will be overkill.

The mech/pilot position is a thing that potentially changes at every frame, so having a uniform (variables you can pass from your game to the shader) for each light is the best approach for performance. We know that there can be at max 6 mechs/pilots in the game, so we define 6 uniforms for lights.

Do you remember that 'if' are bad in shaders ? Well, this is why smoothstep() is used.

In this context smoothstep() returns an interpolated float between 0 and 1 based on the 'ray' value (the distance from the light center to the pixel). If 'ray' is 0 the result will be 1 (full lighting for the pixel), while if it is higher than 'z' (the light distance) it will be fixed to 0 (black pixel). Values between 0 and 'z', will be interpolated toward 1. The result is multiplied by the 'w' of the vector, that you can see as a flag to recognize turned-off light (they have 'w' set to 0).

A nice thing about this approach is that more the pixel is far from the light,  darker it will be. This ensures a smooth light circle around the mech.

Our game is 16:9, so computing the distance between two points will result in an ellipse instead of a circle. Albeit we could have hardcoded that value in the shader (well, it is always 16.0f/9.0f) we prefer to pass it from the game engine as in the future we may want to support other aspect ratio.

Last note is about the delta value, summing it allows our shader to generate more intense lighting when multiple mechs/pilots are near.

Full-Text Search in Django with PostgreSQL

How to configure the uWSGI server in emperor mode